How about heading out on adventurous training and camps, sometimes overseas? Normal for cadets.

Yes, it's a challenge, but that's what life's all about.

Very cautiously and very carefully, we are BACK! On Tuesday, 20th October 2020, we did the first of five inductions planned to return our Cadets in their new, smaller flights and familiarise them with the new building layout and procedures introduced to make (and keep) us a COVID safe environment.

The radio communications and cyber security training is highly beneficial to the cadets, as it improves their knowledge of cyber security, social media safety and how to protect themselves and their devices from malware and viruses. END_OF_DOCUMENT_TOKEN_TO_BE_REPLACED 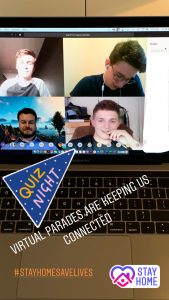 At the start of the year, the Squadron had a full and busy calendar of activities to look forward to through 2020. Unfortunately, the impact of COVID-19 has prevented us from doing these activities though everyone on Squadron knows that this is the correct thing to do to protect each other and the NHS.

However, our Squadron crest bears the motto ‘Ad Augusta per angusta’, which translates from Latin to English as ‘Through difficulties to honours’ and so we remember this as we change the method of training delivery with the staff facing the difficulties in order to ensure the Cadets can be honoured with continued training.

In the months from September to October, a little more than 100 cadets took part in Thames Valley Wing Air Cadets’ fieldcraft courses.  Also known as the ‘Tactical Leadership Courses’, they culminated in a blank firing exercise with cadets, a first for the Wing.  Throughout, cadets were given progressive opportunities to learn and demonstrate skills from camouflage and concealment to section-level tactics with training ammunition, all whilst developing their communication, teamwork and leadership skills. END_OF_DOCUMENT_TOKEN_TO_BE_REPLACED

On Thursday 26th April, Earley Squadron had it’s Annual Formal Inspection. This annual event was our opportunity for the Squadron’s cadets to showcase their skills, talents and achievements to both parents and wing staff. This year, the inspecting officer was Deputy Wing Commander Thames Valley Wing, Squadron Leader Trevena, who was accompanied by Warrant Officer Twigg as the inspecting Warrant Officer. END_OF_DOCUMENT_TOKEN_TO_BE_REPLACED

@Official2120
03 June at 12:21
RT @WitneyTownCounc: Huge thanks to all who helped out at the Beacon on The Leys. @RotaryWitney @coffee_shed @Official2120… https://t.co/gJSzSYFZrs