2507 (Bicester) Squadron is one of the largest and most dynamic Squadrons in Thames Valley Wing.

Cadets from 2507 Squadron take part in all RAF Air Cadets activities and the Squadron has an active marching band. We take new recruits into the Squadron on three "intakes" each year, one in January, one in April and one in August.

The radio communications and cyber security training is highly beneficial to the cadets, as it improves their knowledge of cyber security, social media safety and how to protect themselves and their devices from malware and viruses. END_OF_DOCUMENT_TOKEN_TO_BE_REPLACED

On Thursday 24th of April 2507 (Bicester) Squadron ran virtual parade night. We talked about the RAF’s involvement in Disaster Relief, what aid/relief is needed following a natural disaster and the cadets were then tasked with making a lander for an egg. It was amazing to see so many cadets take part in our drop challenge. We saw Egg Sheeran, Billie Egglish, Meggan Shelly, Ed the egg and Bobby all survive, and that’s just to name a few. Great to see everyone getting creative and having fun. Could you survive the egg drop? 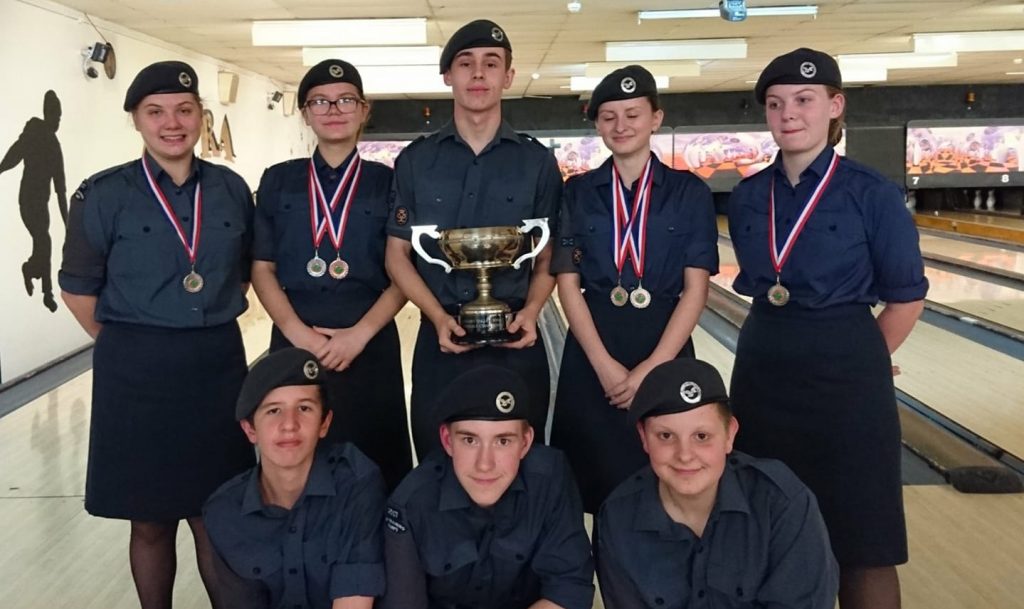 The female cadet defended their title but were pipped to the post and came second. The male cadet team added to the scores and we came 1st overall out of Thames Valley Wing!

A party of cadets and staff from Thames Valley Wing joined Hants and IOW Wing on a trip to the WW1 sites around Ypres in Belgium this weekend. The trip included visits to several WW1 cemeteries where the cadets were able to lay crosses and pay their respects. With the approach of the 100th Anniversary of the end of WW1, it was a particularly poignant time. The highlight of the trip was the participation in the Menin Gate Last Post cemetery, during which the Wing laid a wreath. END_OF_DOCUMENT_TOKEN_TO_BE_REPLACED

In the months from September to October, a little more than 100 cadets took part in Thames Valley Wing Air Cadets’ fieldcraft courses.  Also known as the ‘Tactical Leadership Courses’, they culminated in a blank firing exercise with cadets, a first for the Wing.  Throughout, cadets were given progressive opportunities to learn and demonstrate skills from camouflage and concealment to section-level tactics with training ammunition, all whilst developing their communication, teamwork and leadership skills. END_OF_DOCUMENT_TOKEN_TO_BE_REPLACED

The first weekend focused on cadet fieldcraft skills with some of the cadets even sleeping under the stars in bivouacs with none of their normal luxuries. That alone is tough enough but to then add two days of intense and relentless training makes their achievement all the more significant. END_OF_DOCUMENT_TOKEN_TO_BE_REPLACED

@bicesteratc
05 August at 18:31
Sqn @DofE Exped - While the cadets have to be self-sufficient, the staff have BBQ with S'berries & Cream for pud!… https://t.co/PV3Am2FMSt

@bicesteratc
05 August at 08:19
@AcoSwim @ComdtAC @RAFBF @aircadets @bfbs Good luck and a fair wind to you all! Please keep us up to date. :)