Windsor Air Cadets provides opportunities for you to get airborne, meet new people, learn new skills, develop in character and ability and have fun doing it. 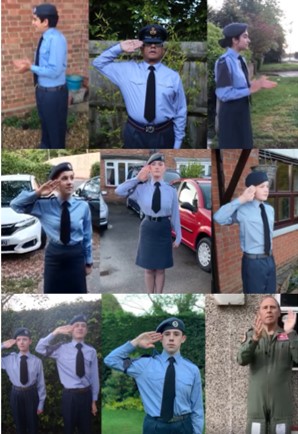 Captain Tom Moore is celebrating his 100th birthday today so, along with many other Air Cadet squadrons, 459 (Windsor) Squadron are joining in, and wishing him a very happy birthday.

In the months from September to October, a little more than 100 cadets took part in Thames Valley Wing Air Cadets’ fieldcraft courses.  Also known as the ‘Tactical Leadership Courses’, they culminated in a blank firing exercise with cadets, a first for the Wing.  Throughout, cadets were given progressive opportunities to learn and demonstrate skills from camouflage and concealment to section-level tactics with training ammunition, all whilst developing their communication, teamwork and leadership skills. END_OF_DOCUMENT_TOKEN_TO_BE_REPLACED

The first weekend focused on cadet fieldcraft skills with some of the cadets even sleeping under the stars in bivouacs with none of their normal luxuries. That alone is tough enough but to then add two days of intense and relentless training makes their achievement all the more significant. END_OF_DOCUMENT_TOKEN_TO_BE_REPLACED

Thames Valley Wing played a lead role when  over 700 RAF Air Cadets and Adult Volunteers from across the South West Region proudly celebrated RAF100 with an unprecedented parade through the streets of Windsor. With the iconic Windsor Castle in the background, the parade drew hundreds of people onto the streets to watch as a sea of light blue took over the Royal Berkshire town for the day. END_OF_DOCUMENT_TOKEN_TO_BE_REPLACED

Cadets and staff from 459 (Windsor) Squadron have welcomed the RAF100 baton relay to the RAF’s spiritual home at Runnymede.

Having run the baton 18 miles from Aldershot, RAF Flight Sergeant Jay Ferguson led the runners into the memorial. He said: “The baton is visiting 100 key RAF locations and many more with significance to the RAF over 100 day. We brought the baton to Runnymede as part of the baton relay, for the significance of the site and to commemorate those who went before us and made the ultimate sacrifice for us to be here today. .” END_OF_DOCUMENT_TOKEN_TO_BE_REPLACED

@459AirCadets
08 May at 16:00
Many look back at the huge number of nations that had to work with each other - not just Britain, but its #allies a… https://t.co/rUpbBs1ohN