Situated in the heart of the Vale of the White Horse, 1861 (Wantage) Squadron has been serving the towns of Wantage, Faringdon and the surrounding villages with opportunities and activities for aviation interested young people since 1941. 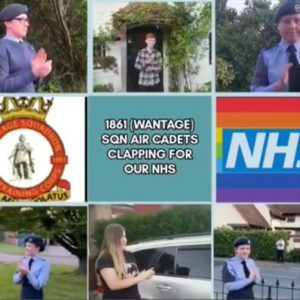 On the 16th of April, some of our cadets put on their uniform and clapped at eight o’clock along with many others in the region. We did this to say thank you to all the hard working; carers, doctors, nurses and other workers within the NHS, that are putting themselves in risk to help those with Covid-19.

In the months from September to October, a little more than 100 cadets took part in Thames Valley Wing Air Cadets’ fieldcraft courses.  Also known as the ‘Tactical Leadership Courses’, they culminated in a blank firing exercise with cadets, a first for the Wing.  Throughout, cadets were given progressive opportunities to learn and demonstrate skills from camouflage and concealment to section-level tactics with training ammunition, all whilst developing their communication, teamwork and leadership skills. END_OF_DOCUMENT_TOKEN_TO_BE_REPLACED

The first weekend focused on cadet fieldcraft skills with some of the cadets even sleeping under the stars in bivouacs with none of their normal luxuries. That alone is tough enough but to then add two days of intense and relentless training makes their achievement all the more significant. END_OF_DOCUMENT_TOKEN_TO_BE_REPLACED

Woodley Air cadets have been crowned Athletics champs after an action packed day of competitions Abingdon’s Tilsley Park stadium. In taking the win they narrowly beat Slough and Britwell units from a field of almost 200 cadets from 14 Squadrons from right across Berkshire and Oxfordshire. The winners in each of the competitions will now go forward to represent Thames Valley Wing at the South West Region championships. END_OF_DOCUMENT_TOKEN_TO_BE_REPLACED

Thames Valley Wing played a lead role when  over 700 RAF Air Cadets and Adult Volunteers from across the South West Region proudly celebrated RAF100 with an unprecedented parade through the streets of Windsor. With the iconic Windsor Castle in the background, the parade drew hundreds of people onto the streets to watch as a sea of light blue took over the Royal Berkshire town for the day. END_OF_DOCUMENT_TOKEN_TO_BE_REPLACED

The 2017 Wing Awards evening held at RAF Benson has recognised the service and dedication of cadets, instructors, Senior NCO’s, Officers and Civilian Committee members from right across Oxfordshire and Berkshire. This year the awards were presented by Group Captain Eddie Cole, Regional Commandant (South West). END_OF_DOCUMENT_TOKEN_TO_BE_REPLACED

@WantageATC
06 June at 11:09
Today we should have been on parade, remembering D-day. Please take a moment to remember the sacrifices made for yo… https://t.co/ydAmEvV3jv

@WantageATC
08 May at 08:46
Some advice from our cadets in how to celebrate VE Day TODAY! Have a great day and don't forget the 2 minutes sil… https://t.co/vNuAlUGvns

@1460aircadets
02 July at 18:07
Congratulations  to the 5 cadets on achieving your BTEC level 1 in teamwork and personal skills for uniformed youth… https://t.co/UMSVlZ6NQL

@153AirCadets
02 July at 18:04
RT @Tony_KeelingRAF: For those of you with #LGBT+ family, friends and colleagues, please read this and then reach out and check they are… https://t.co/quCbBXCBOf

@153AirCadets
02 July at 09:01
RT @CPATVW: Really enjoyed my virtual journey to 328(Kingston-Upon-Thames) Sqn tonight to deliver a Wellbeing and Resilience Wo… https://t.co/YhiI4LP4rH
more...
This site uses cookies: Find out more.