The 2017 Wing Awards evening held at RAF Benson has recognised the service and dedication of cadets, instructors, Senior NCO’s, Officers and Civilian Committee members from right across Oxfordshire and Berkshire. This year the awards were presented by Group Captain Eddie Cole, Regional Commandant (South West). A Wing spokesperson said

“Everyone who has received awards are  an inspiration to us all in Thames Valley Wing, not only for their work in the local area, but for their wider support of the local community.” 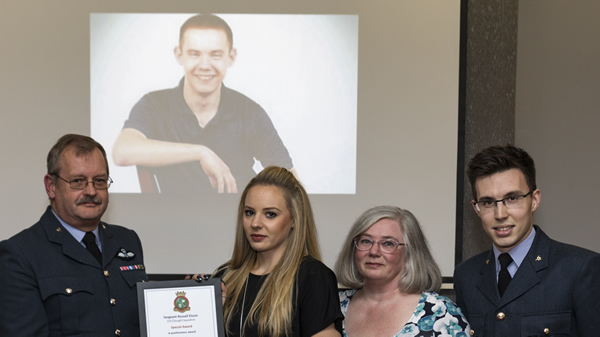 Sgt Russell Elsom of 153 (Slough) Squadron sadly passed away in June this year. He was the real backbone of the Squadron, always going above and beyond the call of duty to ensure the cadets gained the best experience possible and that the Squadron worked as well as it could. Since he sadly passed away the Squadron have realised even more how much Russell did for them at Slough, and how a lot of the work he did went unnoticed. He was so proud to be back in uniform again, and even more proud when he passed his course at RAF Cranwell. Russell would work nights and still ensure he was at the Squadron for a night shift, any activity after a night shift, if he felt he was needed he would be there. It has been a hard struggle this loss for the squadron. He is hugely missed by staff and cadets.