Cadet Warrant Officer Lauren Rysnburger, of 150 (City of Oxford) has been judged the best female cadet in the Air Training Corps. Lauren was amonsgt a number of high flying RAF air cadets and volunteers were honoured today at the national awards ceremony held at the home of the RAF – RAF College Cranwell.

CWO Rynsburger’s long list of achievements include her being a graduate of the Qualified Aerospace Instructors Course where she was the top student, is a graduate of Junior Leaders, holds a Private Pilot’s License, has achieved a Gold Duke of Edinburgh’s Award and currently holds the position of Lord Lieutenants’s Cadet for Oxfordshire,

“CWO Rynsburger is an exceptional young lady with an insatiable appetite and passion for everything the Air Training Corps has to offer. She has is a high achiever, has an infectious personality and is true ambassador for the Wing, Region and  Corps. This great news and I pass my hearty congratulations to her”. 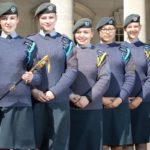