The awards were held at Edward Brooks Barracks with Air-Vice Marshall Jon Lamonte who is currently serving as Chief of Staff Strategy, Policy and Plans at Air Command at RAF High Wycombe presenting the national awards. 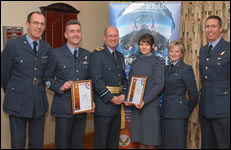 Amongst the haul of awards were Commandant Air Cadets Commendations, Regional Commandants Certificates of Merit, Cadet Forces Medals and Clasps.

One of the highlights of the evening was an award to Cadet Sergeant Jessica Marengo of 2211 (Bracknell) Squadron. Jessica is a fine sportswoman and has represented Thames Valley Wing at Netball, 5-Aside Football and Athletics, and has also won gold medals at the National Judo championships in 2006 and 2007. Her other key achievements include completing a Gold Duke of Edinburgh Award, a Distinction in BTEC Public Service, the Millennium Volunteer Award and was the Best All Round Cadet in Thames Valley Wing in 2008. Jessica is now studying Aeronautical Engineering at Bath University. For her outstanding achievements, she was awarded the Commandant Air Cadets Certificate of Good Service.

Wing spokesman, Squadron Leader Mark Trevena, said: “We congratulate Jessica and the other recipients on their awards. They have all worked quietly and tirelessly, displaying endless commitment and dedication to the Air Training Corps. They are an inspiration to us all; not only in Thames Valley Wing, but also for their work within their local communities.”