A contingent of cadets from Thames Valley Wing squadron’s supported the RideLondon cycling event over the weekend of 3-4 August. While working as volunteers in the bike park area on Sunday 4th of August Cdt Sgt Josh Wilkes and Cdt Guilherme Neves met RAF personnel competing in the cycling event, arriving mid morning having set off on the 100 mile route at 0600 hours that day.

This event is a great opportunity for the cadets to do some volunteering and showcasing what teenagers can do. The opportunity to support such a fantastic international sporting event that brings back the spirit and atmosphere of last years Olympic events has been awesome for us all

On Sunday we spent the day in London assisting with the ‘Ride London’ Event, our main job was managing the ‘Bike Park’ which was done extremely well. The weather held great all day which, along with great views of Buckingham Palace, kept morale high and cadets motivated. Most would say that the highlight of the day was seeing the Mayor of London ride past and compliment us on our smartness.

This Sunday saw 33 cadets and accompanying staff from across Thames Valley Wing assist at this year’s First ever ‘ Ride London’, with over twelve thousand cyclists participating. Those  33 cadets, under the oppressive heat of Central London, ticketed, checked, marshalled, assisted, cheered on and directed in the bike park, course exit and on the cool-down stretch. Despite the heat, the cadets remained upbeat, smart and were a credit to their respective squadrons and to Wing, and were praised by various members of the public and official marshals for their polite attitude, and willingness to assist with any request made. Highlights of the day included meeting the RAF’s cycle team and spotting the London Mayor sailing past. An excellent day, by all accounts. 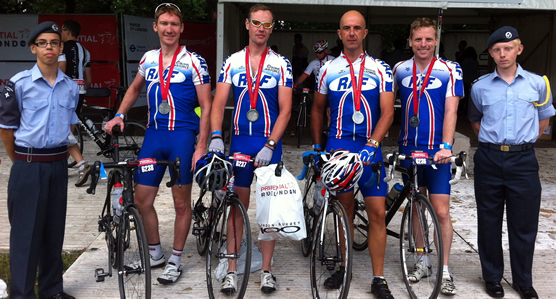