Three female cadets from 966 (Wallingford) Squadron have successfully scored a hat trick by completing their Gliding Scholarships within a month of each other.

Cadets Lisa Cox, Chloe West and Abbey Woollard, all 16 years old and pupils at Wallingford School have been awarded their Silver Wings after each made a solo flight in a Vigilant glider with 612 VGS at Dalton Barracks, Abingdon. They were all offered a Gilding Scholarship just after their 16th birthdays earlier this year and after approximately 12 hours tuition, each cadet was judged to be competent enough to fly the aircraft on their own without an instructor. All three cadets are now eligible to apply for advanced glider training and even more solo flights!

Their success means that 966 (Wallingford) Squadron, despite its relatively small size, has the distinction of having the highest number of cadets with Silver Wings out of the 26 squadrons in the Thames Valley Wing.

Cadet Abbey Woollard said, ‘It was an awesome experience to be flying on your own and it still seems unreal that I have flown an aircraft solo before I can legally drive a car. 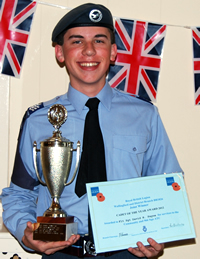 Also this month, Wallingford cadets from both the Air Training Corps and the Army Cadet Force were interviewed by a panel of judges for the Cadet of the Year award which is presented by the Wallingford Branch of the Royal British Legion. The winner was Flight Sergeant David Payne who was presented with the award at a ceremony in the Masonic Hall, Wallingford. This award goes annually to the cadet judged to have made significant efforts in personal development and a notable contribution to the local community.

Reflecting on both sets of achievements, Squadron Commanding Officer, Flt Lt Tom Churnside, said, ‘Flying an aircraft is a skill that demands an aptitude for mental discipline, forward planning and to be totally focused on what you are doing. I am delighted with the achievement of Cadets Cox, West and Woollard and also that of Flight Sergeant Payne in gaining the prestigious British Legion award. It is hoped that Wallingford air cadets will long continue to reach such high standards.’

@Official2120
25 February at 16:24
Wow! Earlier today we discovered from @WitneyTownCounc we had been selected by @MayorWitney as one of the… https://t.co/V596KWhLm8

@DepOCW_TV
17 February at 22:09
RT @OcTvw: Congratulations to Cdt FS Young from @1315_Air_Cadets on her successful CWO board this evening, we look forward to… https://t.co/nFxjUq732w
more...
This site uses cookies: Find out more.