Brize Norton Cadets are back on the road in their new minibus resplendent in the new ACO livery.

The new bus was presented to them at a formal presentation of the keys by the Mayor of Carterton. 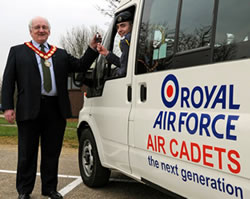 The Squadron raised enough funds thanks to exhaustive work by their civilian committee at various fetes and fund raisers as well as by the cadets themselves who with support from the local community raised a significant contribution bag packing in the Carterton Co-op. In addition generous sizeable donations were made by the Carterton Town Council led by Mayor Cllr Norman MacRae MBE and also the Doris Field Trust.

The bus will be used to transport cadets from the 80 strong Squadron to various events.