On Thursday, 18th July 2267 (Brize Norton) Squadron played host to its Honorary President Air Vice Marshal (AVM) Jon Lamonte (RAF Ret’d) to open its indoor Air Rifle range to add further to the cadet experience at Brize Norton Squadron. The evening started with OC 2267 Flt Lt Colin Burrell escorting AVM Lamonte to the range to be shown how its works within the squadron buildings and the process undertaken by the staff from planning stage to opening. After a demonstration by the squadron cadets AVM Lamonte took his turn at showing the cadets his shooting skills and trying to gain a marksmanship badge! 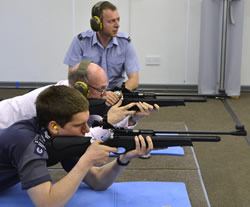 Following the range opening squadron chairman Gp Cpt M Nawroynsky (RAF Ret’d) then showed the newly open Flight Simulator and further explained the fundraising activities that the squadron committee had been undertaking over the past 18 months. The achievement of having the flight simulator installed provides a means to add the airborne element of the cadet experience through structured flying training. With the limited ‘Air Experience Flying’ until the Tutor fleet is back flying this will underpin the knowledge the cadets are learning through their classification studies.

The evening was concluded with AVM Lamonte presenting a number of awards ranging from gliding certificates for FS Buchanan, Heartstart awards for a number of the newer cadets and a promotion to CWO for David Nawroynsky. AVM Lamonte commented on how well the squadron has done since his last visit and marked on the achievements by the cadets, staff and civilian committee and looked forward to hearing more success stories for the next coming year.