Cdt FS Daniel Honey was appointed as the Lord Lieutenant’s Cadet and will accompany Mrs Bayliss on a number of high profile visits around the Royal County of Berkshire.  Daniel has been a high flying cadet at 381 (Reading) Squadron for five years and is the senior cadet on unit.  He has completed his BTEC accredited aviation training, attended RAF Camps both in the UK and in Cyprus. On the Squadron he has taken a lead in teaching the new junior cadets. He has redesigned the entire 6 month induction programme based on the corresponding training packages and has created presentations and learning plans to accompany this. Further to this, he also manages the foot drill lessons with the junior cadets, which he has now done for the last five intakes. Away from the Squadron FS Honey has helped with the Wing level Fieldcraft training, been judged the best Sports Cadet in 2011 and carried the Wing Banner at the Berkshire Diamond Jubilee parade. 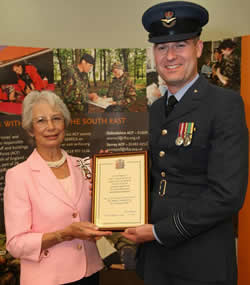 Flt Lt Andrews was presented with a Lord Lieutenant’s Award for his service to Thames Valley Wing.  Flight Lieutenant Richard Andrews joined the Corps in 1988 as a cadet at 381 (Burghfield) Detached Flight. During his time as a cadet he took part in a variety of activities, rising through the ranks to Cadet Flight Sergeant being awarded the “Best All Round Cadet of the Year” on two occasions and amassing some 60 hours powered flying.

Upon leaving the ATC he joined 2624 (County of Oxford) Squadron RAuxAF (Royal Auxiliary Air Force as an RAF Regiment gunner before re-joining as a  Junior Officer at the Detached Flight.  Flt Lt Andrews became Commanding Officer in 2001, taking command of the unit he was a cadet on.

Having a keen interest in Adventure Training and the outdoors, he continues to run Duke of Edinburgh’s Award training & assessment weekends and  field craft training weekends. He is a qualified Range Conducting Officer, Weapons Instructor and Full Bore Coach.

Having become a Wing Staff Officer in 2002 with and is currently the an Assistant Sector Commander for six Squadrons in the East of Berkshire and Wing Field Craft Officer.

@153AirCadets
09 January at 22:37
Announcement Number 3! Congratulations to FS Preet Bhamra on her Commandant’s Certificate of Good Service. This was… https://t.co/uEfQTtTItZ

@AbingdonAirCdts
05 January at 09:48
RT @RAFAC_MHealth: 📌 We're heading into another #lockdown and once again schools will be closed for most of our cadets, but support is… https://t.co/MVZi1JdCBC
more...
This site uses cookies: Find out more.