Fourteen cadets from 211 Newbury Squadron were joined last weekend by two from 1861 Wantage Squadron for 36 hours of field craft training.  The cadets arrived on Saturday loaded with kit and ready for their first task, a one mile walk to the spot that was to be their home for the next thirty six hours –  a field!  The group included cadets who were experiencing their first taste of field craft and they were all quick to learn and practice the skills taught and demonstrated by the eight staff members involved.  The cadets were split into flights for the training which included the basics of field craft including building bivvies, cooking their rations, personal admin and for some spending their first night sleeping outside.  During the day they also learnt the finer points of camouflage and concealment, patrolling and contact drills, some basic first aid, use of radios and the duties of a sentry. 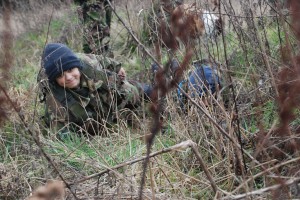 Despite some awful weather everyone enjoyed the weekend and developed their knowledge and skills.  CI Gareth Pye commented “ although this annual event usually suffers from very seasonal weather, it was the first time they’d experienced hail showers, nevertheless it was a very enjoyable event for all taking part”.