On a brisk Sunday morning on the 20th April, Air Cadets and Army Cadets from Kidlington took time out from their weekend to help out at the OX5 Run at Blenheim Palace. The run itself was 5 miles long and in aid of the Oxfordshire Children’s Hospital; last year it raised almost £100,000 for the charity. This year was the 12th consecutive run with over 1400 entrants. 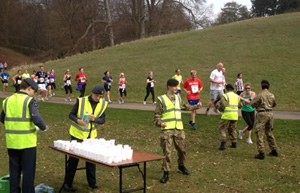 1315 (Kidlington) Squadrons role for the day was to hand-out water to the runners when they reached the manned station at the 2.5 mile stage. At 10:30am, the shots were fired and the race was underway. After around fifteen minutes the first runner appeared from around the corner, and it wasn’t long before the rest of the pack followed. At this point, both forces worked together as a team to ensure that all participants were hydrated and fully supported through the gateway. After around one hour, the squadron’s role had been performed successfully and efficiently. The units efforts did not go unnoticed though as the cadets were presented with a medal and chocolates for their assistance throughout the morning. Overall, the morning spent helping their local community was extremely rewarding and the cadets who helped were a credit to both themselves and their squadrons, whilst in the public eye.