Earley Sqn raised £120 during a fun evening in support of Children in Need. Organised by a group of cadets, the evening included a rank auction with members of staff and cadet NCOs surrendering their ranks to the highest bidder for the evening. The uniformed staff, Flt Lt Alexander and FS (ATC) Miller, were reduced to the rank of cadet for the evening and enjoyed joining the rest of the cadets for a bout of drill and final parade at the end of the evening. 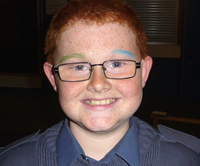 In addition to the monumental change in the rank structure, Cdt McBrien bravely coloured his eyebrows in the name of charity, collecting sponsorship money from cadets and staff. In total McBrien’s eyebrows raised £31.27.

The final fundraising push took the form of a charity auction on items kindly donated by cadet and staff. FS (ATC) Miller also sold his services to the highest bidders and will soon be seen polishing one lucky cadet’s shoes.

The evening wasn’t totally dedicated to raising money as, during the evening the cadets also took part in quizzes and games, including a music quiz and twister.

Plans are now afoot for an even better evening next year when it’s the staffs turn to do the planning!

Earley Sqn (www.1996.org.uk) meets twice a week at Reading University and is open to boys and girls aged 13 to 17.